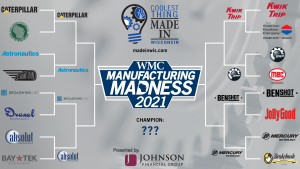 WISCONSIN (NBC 26) — Mercury Marine is confident that their V12 600 HP boat engine, manufactured in Fond Du lac, is the Coolest Thing Made in Wisconsin.

The engine is the biggest, most advanced outboard engine made in the entire world, said Drees. It is so quiet, you can’t even hear the engine run. It’s also 20 percent more fuel efficient than what was put out in the past, he added.

Another local finalist’s products are a bit smaller: BenShot is a father and son team making glassware in Appleton. They embed objects into glasses, like golf balls and bullets. The glassware is designed in-house, 3-d printed and cast out of metal.

“It started as a project with my dad,” said Ben Wolfgram, president of BenShot. “We started in his single-car garage in New London, Wisconsin. And now we have 40 full time staff and 40,000 square feet.”

BenShot is just as hopeful that their Aircraft Propeller Glass, made in Appleton, will win it all.

“For us, every vote is directly impacting our lives,” said Wolfgram. “Because we are such a small team have been around, only six years, so not that many people know about it.”

Broadwind Heavy Fabrications is hoping their 140-ton navy crane takes first. It’s the first time that a crane of this size has been built and shipped fully assembled. The crane will support the U.S. Navy in New Hampshire, and Broadwind partnered with Kona Cranes on the project to engineer, fabricate, build, assemble and then ship this crane about 2,100 miles to the East Coast, said Brett Hartman, Business Development Director for Broadwind Heavy Fabrications.

“The whole community came out and watched the crane get launched,” said Hartman. “I’d say there were probably four to five thousand people out that day watching the crane leave Manitowoc, and we just got a lot of positive feedback from from the community in Manitowoc.”

All three manufacturers just hope everyone in Wisconsin gets involved and votes for their favorite.

“The fact that they’re supporting the manufacturing business,” said Hartman. “We think that’s great in itself, and if we happen to win, well that would be all the better.”

This round of voting ends tomorrow at 5 p.m. You can vote once per day, per device in all four matchups, here.