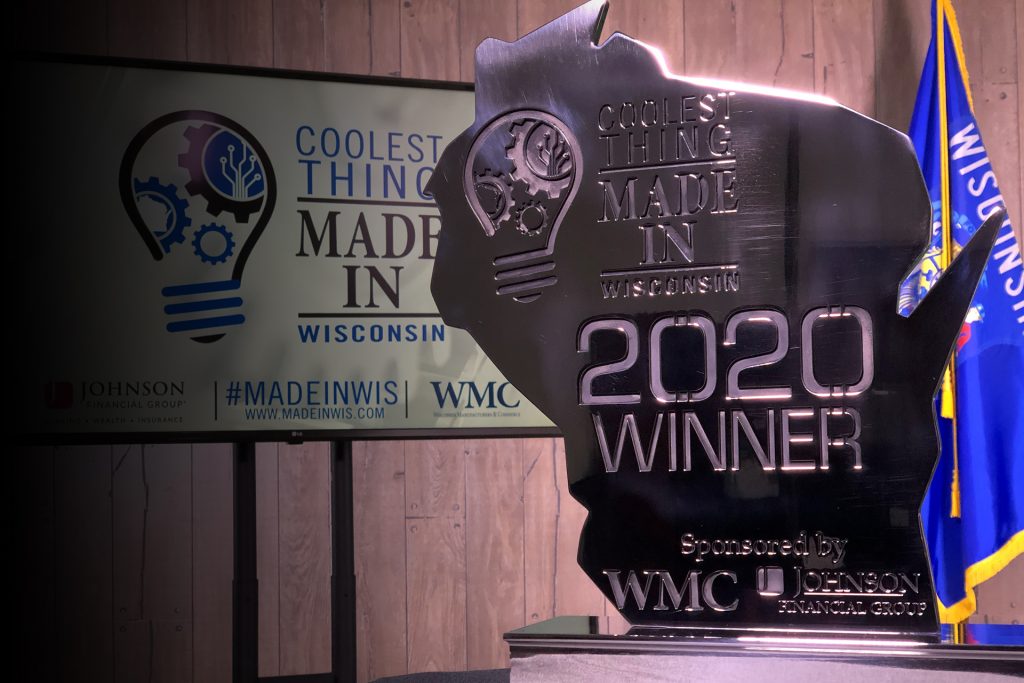 MADISON – Partnering for the fifth year in a row, Wisconsin Manufacturers & Commerce (WMC) and Johnson Financial Group announced the 2020 Coolest Thing Made in Wisconsin on Wednesday. After more than 125,000 votes were cast over multiple rounds, the Mobile Autonomous Robotic Cart (MARC) from MuL Technologies in Mequon was crowned the winner.

Nearly 50,000 votes were cast in the final round of the contest. Other finalists included: Caterpillar Global Mining in South Milwaukee, C.C. Moo LLC in Stoughton and Kimberly-Clark in Neenah. The winner was announced at the annual WMC Foundation Made in Wisconsin Luncheon, which was held virtually.

“Wisconsin has a diverse and innovative manufacturing industry, and our finalists portray that,” said WMC President & CEO Kurt Bauer. “From diapers and children’s clothing to industrial machinery and robotic carts, we congratulate our finalists and all of our nominees in this year’s contest.”

The Coolest Thing Made in Wisconsin was created to recognize the contribution manufacturers bring to the state’s economy and local communities. More than 9,000 manufacturers employ nearly 500,000 people in Wisconsin – that is one in six workers. The winner is announced each year in October, which is proclaimed Manufacturing Month by the governor.

“Manufacturing is a critical part of Wisconsin’s heritage and its future,” said Johnson Financial Group President & CEO Jim Popp. “We could not be more proud to partner with WMC on this contest, and we offer our sincere congratulations to MuL Technologies for taking home the top prize.”

Nominations were accepted in August, and nominees competed in four rounds of voting over the last two months. Since its inception in 2016, over 750,000 votes have been cast to determine the Coolest Thing Made in Wisconsin.

“Wisconsinites are passionate about the products that we make here,” added Bauer. “And that passion showed this year as manufacturers responded to COVID-19. Whether they switched over production lines to make testing supplies, hand sanitizer and PPE or made significant changes in facilities to keep workers safe, our manufacturers have been resilient. We are proud to recognize them during Manufacturing Month.”

Click here to watch the announcement from the virtual WMC Foundation Made in Wisconsin Luncheon.

About the winner:
MuL Technologies was founded in 2018. It is a partner of GMI Solutions – a contract manufacturer that has been serving customers around the globe since 1983. MARC is a completely independent robotic cart with the brains to map a facility, avoid obstacles in its way, and get things where they need to go, when they need to get there. The robotic cart can be pre-programed with a destination with a single command and be sent on its way with the tap of a button.