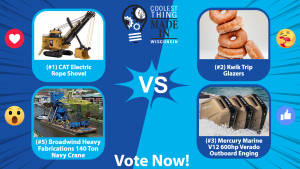 MADISON, WI (WTAQ) — The finalists for the Coolest Thing Made in Wisconsin competition have been announced.

Over 150 products were nominated in the most recent run of the annual competition. Over 135,000 votes were cast to narrow it down to the top four.

“Theres finalists are going to battle it out to find out who gets the prize of being called the coolest thing made in Wisconsin,” said Nick Novak, WMC Vice President.

That is, indeed the only prize. The win comes with a trophy and bragging rights.

The winner will be decided by a vote on their website, www.madeinwis.com.

To read more go to: www.wsau.com.