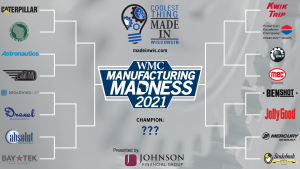 What do skee-ball, a 140-ton Navy crane, and Kwik Trip Glazer Donuts have in common? They’re all some of the coolest things made in Wisconsin according to this year’s Coolest Thing Made in Wisconsin contest staged by Wisconsin Manufacturers and Commerce.

Earlier this month, nearly 50,000 votes were cast to determine the top 16 products made in Wisconsin. These 16 items will move on to a head-to-head tournament-style bracket.

WMC and Johnson Financial Group are partnering to host the annual contest. The goal is to highlight Wisconsin’s manufacturing industry, according to WMC President and CEO Kurt Bauer.

The next round of voting will help determine the winner which will be announced during Manufacturing Month in October.

Here are the semi-finalists of top 16 coolest things made in Wisconsin.

To read more go to: www.jsonline.com.