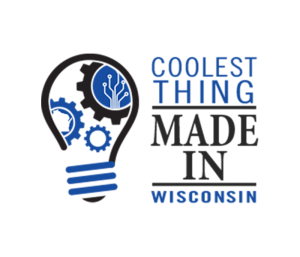 The Wisconsin Manufacturers & Commerce (WMC) and Johnson Financial Group is holding its annual Coolest Thing in Wisconsin contest. After a round of nominations, 16 finalists were reduced to 8 in a bracket competition.

Three of the eight are from our corner of Wisconsin: Outboard motors by Mercury Marine in Fond du Lac, aircraft propeller glasses from BenShot of Appleton, and a 140-ton Navy crane by Broadwind Heavy Fabrications in Manitowoc. Voting is underway at www.madeinwis.com.

Local manufacturers knocked out in the round of 16 were American Excelsior Co. of Sheboygan with its Power-Stop Archery Targets, Pulaski’s BayTek Entertainment Skee-Ball, Drexel Building Supply of Campbellsport for its Off-site Construction Residential Building and Krier Foods of Random Lake’s Jolly Good Soda.

The eight finalists are lined up this way:

Voting is now open, with bragging rights on the line.