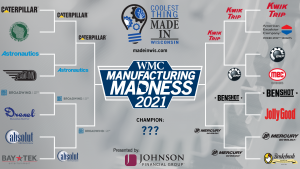 (WFRV) – We’re in the final stretch of the ‘Coolest Thing Made in Wisconsin’ contest with only four products remaining. What will you vote for?

The contest, which has taken place over the course of three weeks, initially started with 16 total products competing for the title of ‘Coolest Thing Made in Wisconsin’. However, as the weeks went on and the votes poured in, that number rapidly dwindled.

As the last week of voting begins, the final four products competing in the contest are as follow:

Two out of the four finalists are representing Northeast Wisconsin being that they are based in the region. Mercury Marine is based in Fond du Lac while and Broadwind Heeaby Fabrications is located in Manitowoc.

The final round will feature four products competing in a popular vote round to determine the ultimate winner, which will be announced on Oct. 14 at Business Day in Pewaukee. You can cast your vote here!

To read more go to: www.wearegreenbay.com.